SHRUNK BY THE POWER OF THE ATOM

As a lethal virus sweeps across the country, two brothers (Chris Pine & Lou Taylor Pucci) and their two friends (Piper Perabo & Emily VanCamp) take to the road in search of a childhood vacation spot the brothers believe to be a “plague-free” zone.

It’s an idea most of us are familiar with; when danger strikes, retreat into the past.

All of the recent apocalyptic TV shows and movies seem to carry the same message; only those who look like they’ve walked out of a “Gap” commercial will survive.

Over four days, the main characters are put through scenarios that wreak havoc with their emotions and test whatever humanity they have left. The results are shocking and unexpected.

“Carriers” stands out because the directors (brothers Alex and David Pastor) and the cast pull no punches. It takes guts to muddy the line between hero and villain and push moral boundaries. The story demanded it, but I’ll bet it made the people holding the purse strings uncomfortable.

It’s a real pity the film wasn’t given a stronger push by Paramount Vantage. Hopefully, it’ll find an audience on DVD. 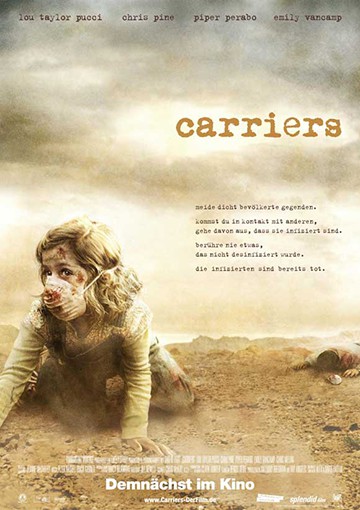 Chris Pine – Not afraid to play a violent, unlikable character – And God Bless him for it.

Ever since “The Bourne Identity” there’s been global recognition that no one kicks the living shit out of people like Matt Damon. His capacity to create joy goes beyond any tally of broken bones and mangled corpses. If he was beating my own mother to death, I’d be hard pressed to keep a smile off my face. The man has a gift.

Damon spots an opportunity to snap the spine of an annoying street performer.

In “Green Zone” Damon leads a special unit tasked with locating and securing Weapons of Mass Destruction. His willingness to risk his life on a doomed mission evokes a great deal of sympathy from the audience who know he’d have better luck tracking down Santa Claus.

In fact, I’d strongly recommend showing “Green Zone” to your child before revealing the truth about Christmas. Mommy and Daddy’s lies will appear trite compared to the monumental horseshit the government expect Damon to swallow.

The good news is that an important political message has been perfectly integrated into a two-hour chase movie that’s chock full of terrific Matt Damon violence.

There are plot complications involving a rogue C.I.A. agent, a beautiful reporter and a dangerous terrorist, but the important thing is that along the way dozens of people get damonized*.

With Matt, it’s the journey not the destination.

If you’re torn over the idea that no good could come from invading and occupying another country, “Green Zone” might just be the movie to change your mind.

As far as I’m concerned WMD now stands for “Whacked by Matt Damon.”

*Damonize – verb – the application of force by Matt Damon to the body of an individual (usually a foreign national) resulting in death or permanent disability. 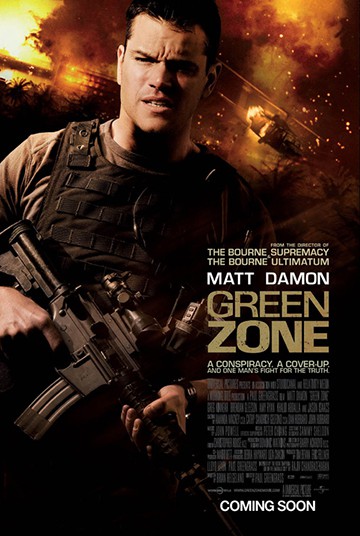 This is probably the best carnivorous fish/jewel heist movie that I’ve ever seen.

With a director who couldn’t speak English, the cast was forced to deliver performances big enough to transcend the language barrier. Even without the bloody, underwater battles this is gripping stuff.

If you like fish and Lee Majors this is a win-win situation, but there are several other good reasons to check it out: 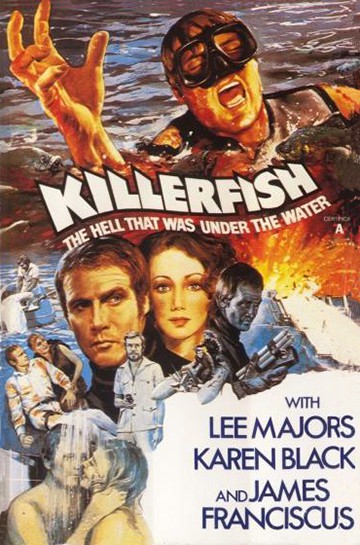 Before “The Orphan” begins, we’re treated to a PSA from www.adoptuskids.com:

The movie “The Orphan” is based on fictional characters… NOT real children.

Who is this aimed at? Wouldn’t you want to discourage potential parents who harbor secret fears they may adopt a psychopath? Just a thought…

Worst case scenario, “The Orphan” severely limits adoption opportunities for small Russian girls with dead, doll-like eyes. Seriously now… how many are there rattling around the foster care system? Please email your answer to: RussianChildDeadDollLikeEyesStat@HalfManHalfMovie.com

If you can put these concerns aside, the film has a lot to offer the average family including; a pigeon crushing, a playground maiming, an arm mangling, a child smothering and a wonderfully, spirited nun bashing.

Hang in there till the end for that most awkward of new parent moments; the adopted child tries to seduce her new father.

Isabelle Fuhrman is terrific as Esther, the troubled, homicidal (did I mention she was adopted) child. I hope it paid well, because her days earning babysitting money ended the moment she picked up a claw hammer.

Vera Farmiga plays the sympathetic, ex-alcoholic Mom who realizes Esther is a monster, but can’t get anyone to listen to her. Her husband, mother, shrink and pretty much everyone she speaks to advise her to calm down and stop drinking. I thought it was a lovely touch that many of these assholes end up getting killed.

I’m sure you’ve heard there’s a surprise ending. I won’t ruin it, but I will say that it’s clever enough to make Esther’s actions understandable and totally morally justified.

Enjoy the movie and don’t be a numskull and rule out adoption. You could end up with one of the cute kids in the movie… unless they’re all fictional. 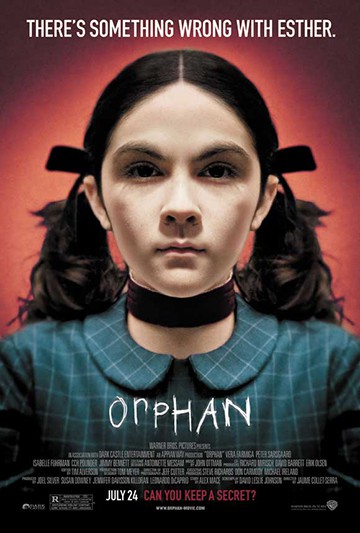 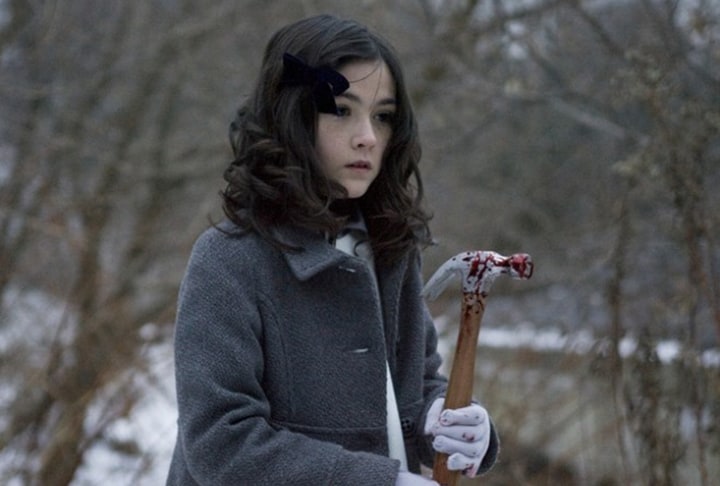 Esther introduces a family friend to one of
Russia’s oldest symbols. 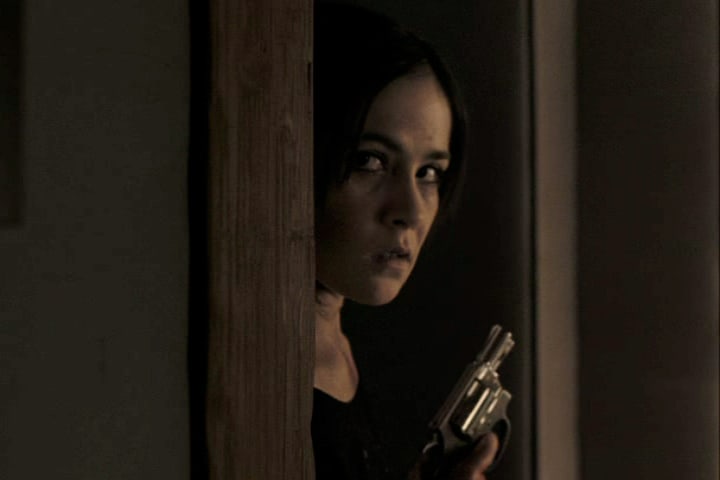 Esther shows her parents that she has the skills
needed to attend an American school.

Here’s an interesting question; If you’d directed “Mortal Kombat,” “Event Horizon,” “Soldier,” “Resident Evil,” “Alien Vs Predator” and “Death Race,” and you went on to produce a film called “Pandorum,” what are the odds it would be any good? 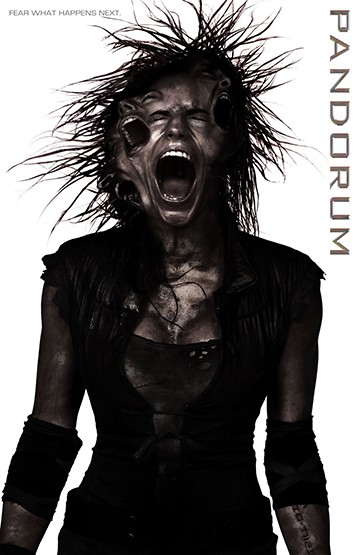 War movies walk a fine line between drama and melodrama, but it’s very easy to tell which side of that line you’re on.

With each scene, ask the question:

“If I replaced the actors with Muppets, would I need to rewrite any of the dialogue?”