Sexual sadist and serial killer John Wayne Gacy, who has been burning in hell since 1994, received yet another blow yesterday when his membership in the “American Union of Clowns” was summarily revoked.

“After careful consideration, we believe the brutal torture, murder and dismemberment of several young men is at odds with the true spirit of clowning,” explained A.U.C. Chairman, Ivor Gudichik.

Gacy appeared both surprised and dismayed by the A.U.C.’s decision. “The men I raped and garroted were never part of Pogo’s routine,” said Gacy.

“Being a prolific serial killer never affected my clowning and certainly, being a terrific clown had no impact on my desire to kill and kill again.” 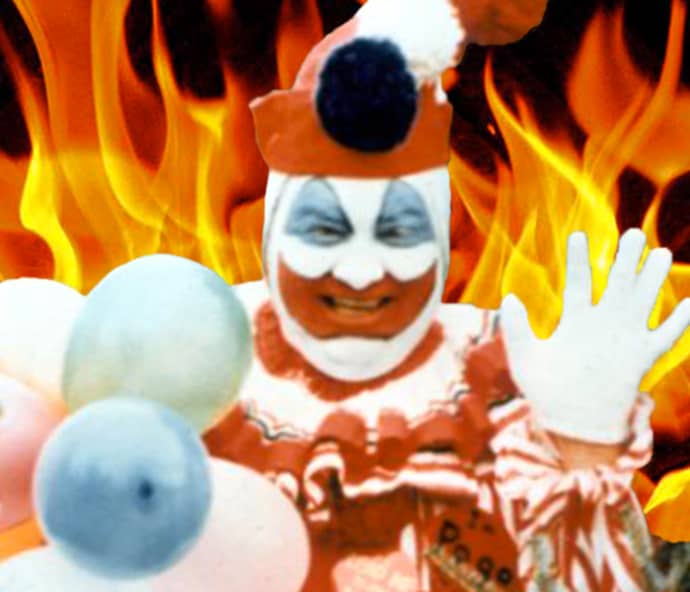 Clowning is a dying art, but the popularity of murdering total strangers
has skyrocketed in recent years.
“I didn’t kill clowning,” insisted a teary-eyed Gacy. “I killed people.”

Gacy vowed to fight the A.U.C. ruling and has retained legal counsel to prepare for an appeal.

Although Hell is home to some of the most well-known criminal defense attorneys, Gacy has chosen a fair-haired, handsome young lawyer with relatively limited experience.

Jason believes in my right to clown,” said Gacy. “That faith means more to me right now than I can express. And he is so beautiful.”

Gacy’s attorney, Jason McNeil, practiced law for only three years before he was disbarred for jury tampering and later killed by members of the New Jersey mafia. A gunshot wound to the head has done little to temper his capacity for argument.

“Mr. Gacy had clowned around for over twenty years before the State of Illinois decided to end his life by lethal injection. Indeed, he still clowns on occasion down here although the opportunities for joy are somewhat limited,” said McNeil.
“To single out and expel Mr. Gacy from the A.U.C. for engaging in ‘non-clowning’ activities while not in costume is clearly ‘serial killist.’ Ted Bundy, Richard Ramirez and David Berkowitz have retained a longstanding membership in the ‘Odd Job and Drifters Union.’ Why are they not facing the same kind of discrimination?”

Gacy remains a member of the “American Federation of Carnies, Clowns and Freaks.” This organization sees no conflict between Gacy’s unquenchable desire to inflict pain and death on strangers and his work as a costumed performer.

“Frankly, if we were to start cutting members because of their personal proclivities we’d be closing our doors within a week,” said Federation Leader, Frankie “Half Man” Desota. “You really don’t belong in this line of work unless you’re deformed or disturbed in some way.”

Gacy is convinced that the same group of people who hounded him in court and pushed for the death sentence are behind this current attack. “I’m being victimized by the relatives and friends of my victims,” said Gacy.

“These aren’t circus people. You know how many stilt walkers, how many miniature Romanian horse riders or how many trained clowns are in this group? Zero. Don’t they know what they’re taking away from me?”

Gacy’s appeal in front of the Clown Commission is expected to occur in late March.