This film holds the record for the longest sequence of funding partner logos I’ve ever had to sit through. What’s truly amazing is that it hails from Brazil, a country so corrupt that groups this large are only ever brought together during mass kidnappings.

One name that stands out is the Brazilian Tourist Authority. They appear to have badly misjudged the film’s potential to attract visitors to Rio De Janeiro, unless they were specifically targeting drug and arms dealers. Admittedly, the film shows this market segment is thriving and has terrific growth potential.

“Elite Squad” takes us inside a Special Operations Unit of the Military Police who use the law enforcement tools of brutality, intimidation and murder to keep a leash on the drug gangs in the slums of Rio.

Love, self worth and a sense of hope is beyond the reach of the teenagers trapped in this rathole, but the primary catalyst for most of the acting out is the ease with which they’ve gained access to automatic weapons and tons of raw cocaine. Most spend their days on the rooftops where they drink, snort coke, mumble to one another and wait for police raids. 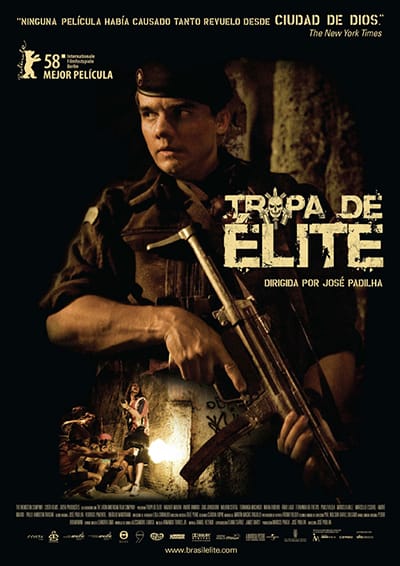 A raid provides the only opportunity they’ll get to yell, sprint five or six yards and be riddled with bullets. So many young men choose to die this way, my guess is it’s the only attention they’ve received from an authority figure since their third-grade play.

Anyone left standing has a plastic bag placed over their head by the police and the phrase “Tell me where they are?” yelled at them repeatedly. Victims scream, weep and many, unable to answer the question due to a lack of context, simply faint away. 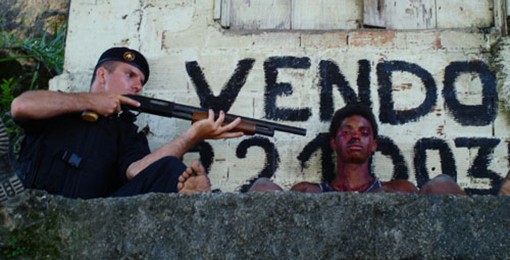 A typical Brazilian courtroom. Case backlogs have forced
many trials to be held outdoors

His top two choices are clean, idealistic hotshots pulled straight from the police academy. Matias is an intellectual, Neto a man of action; both friends since childhood.

Constant reminders that “one man is a dark reflection of the other” drained my enjoyment of the violence and left me ashamed and confused.

Confusion is one of the primary themes in “Elite Squad.” In almost every scene the police and the drug dealers have a hard time telling one another apart. Although members of the Elite Squad wear a black uniform with a distinct skull, knife and

Amid the chaos, and up to his elbows in the blood of thirteen-year-olds, we find Captain Nascimento, an affable, middle-aged squad leader desperate to get off the streets. The catalyst for this career change, his wife Maria, sits at home waiting to have their first child.

Due to some odd quirk in Brazilian labor law, Nascimento is unable to retire from the unit until he finds his own replacement. 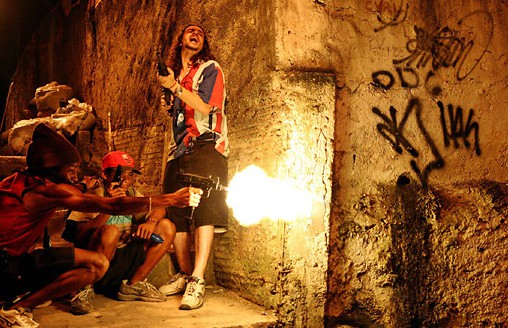 High on cocaine, a gang member practices “Guitar Hero” moves as his comrades engage the police in a ferocious gun battle

Director José Padilha may be trying to show how corruption creates such a web of moral confusion it ensnares both the guilty and the innocent.

It’s also possible he’s pandering to Brazilian audiences who believe that everyone is corrupt and like to have no idea who to root for until a film is almost over and they have to spot the hero from among the characters that are still alive.

As the story progresses, the pressure to find the right replacement and the stress of becoming a first-time father push Nascimento to the edge, yet the nightly firefights in the slums barely seem to faze him. From what we know about stress and its link to premature mortality, remaining on active duty with the Elite Squad would appear to be the healthier choice. Unfortunately, Nascimento’s wife sees things quite differently.

In such a testosterone driven film, it’s a nice change of pace to see men on both sides of the law rendered completely impotent by their wives. 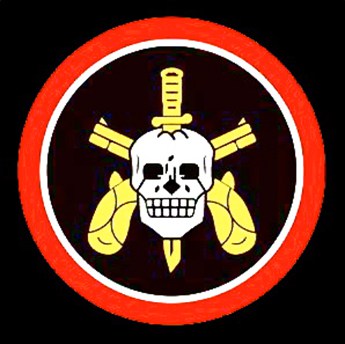 Shoulder patch of the real “Tropa de Lite.”
A symbol of integrity and commitment to justice

In Central American countries, women traditionally express unhappiness by wailing loudly and tearing at their husband’s clothes. In Brazil, women with children send out cries on a frequency that causes infants, toddlers and tweens to accompany them in what can only be described as a bawling tsunami. Those who are pregnant follow their husbands from room to room, clutching their swollen bellies doing a spot-on imitation of Talia Shire in “The Godfather.” Unable to handle the noise most of the men break in less than a minute and join the weeping.

Elite Squad is a roller-coaster ride. If emotional highs and lows and close-quarter house-to-house combat with small weapons make you queasy, then stay away. If you plan on visiting Brazil within your lifetime, then give this film a wide berth. But if you’re game for a night of constant tension and a glimpse at the back-streets of Rio from the point of view of an oppressive militant force, kick this film to the top of your Netflix queue.