BODY OF LIES – IS THE C.I.A. MORBIDLY OBESE?

Ridley Scott’s last three films have been shot in Morocco, a small North African country that has doubled for 12th Century Jerusalem, gladiatorial Rome and war-torn Somalia. Ridley returns for “Body Of Lies” where the country stands in for present-day Jordan, Yemen, Syria and Iraq.

No further proof is needed that a little set dressing can transform Morocco into a dust-ridden shithole from any Century. Still, the natives interviewed on the “Location Featurette” wonder why these terrific films are not bringing in the huge numbers of tourists they’ve been expecting.

I’m aware adjectives like “elusive” and “deadly” are redundant when describing a terrorist, but I’m short on adjectives and “slim” and “affable” seemed inappropriate even if they are accurate. When it comes down to it, Arab men in American films fall into one of five categories that are easily recognized: 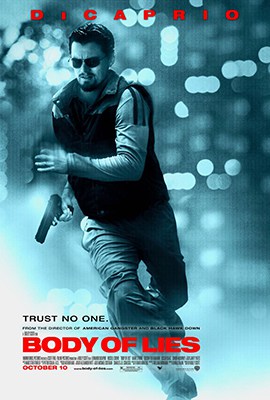 Terrorist Leader – Unshaven, speaks like Omar Sharif, addresses all Americans as “You Westerners”, unable to distinguish between piety and mass murder, comforts fellow Arabs with phrases like “It’s alright, brother,” directly before shooting them in the back of the head.

Terrorist Arab – Unshaven, prone to sweating, feels the need to mention God in every sentence no matter how mundane, holds detonator with wires leading to some form of body harness.

Concerned by Crowe’s weight, DiCaprio falsifies a report showing every single Kentucky Fried Chicken outlet in Bagdad has been targeted by suicide bombers

Crowe and DiCaprio think and operate very differently, a combination that causes endless mayhem, but we know from the “Lethal Weapon” series that these differences will make them a terrific team.

DiCaprio is a actor capable of great emotional depth, but the fact remains that he looks like a high school senior. Even the addition of a goatee, sunglasses and the ability to speak fluent Arabic adds only two to three years. He looks angry and holds a gun well, but he’s simply not believable as the C.I.A. Middle Eastern section chief.

Crowe looks a lot like he did in “The Insider” when he played Big Tobacco whistle-blower Jeffrey Wigand. His hair is gray and close-cropped and he’s carrying a little too much weight around the mid-section. This must be what happens to the human body if your life is filled with stress, secrets and the knowledge that you’ve helped orchestrate the death of so many strangers.

A cell phone earpiece dangles from Crowe’s ear throughout the entire film. It’s not exactly annoying, but it looks uncomfortable. The best feature of this device is that it allows Crowe to talk directly to his six-year-old daughter while having a phone conversation with DiCaprio who’s on the ground in Jordan or Iraq. I’m not sure if this is meant show us that he’s an indifferent parent, a wonderful multitasker or that both jobs require the same skills.

There’s a subplot about DiCaprio’s infatuation with a local Arab nurse (Golshifteh Farahani), but local dating customs suck the life out of the romance. It takes two hours to move from fleeting glances to standing next to one another.

The cultures may be difficult to understand, but the twists and turns of the main plot border on incomprehensible. Now, I understand that in a spy movie I should anticipate a few surprises and expect to be turned around a little, but the game is only satisfying if it all makes sense as the credits roll. 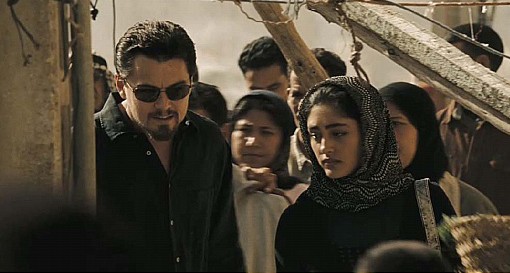 DiCaprio awkwardly reaches for his dates hand, unaware
a growing crowd have been picking up stones
in anticipation of just this moment

I think I get it, but I’m not sure. This leaves me unable to recommend the movie to anyone who has my phone number, in case they call with questions about the ending.

On the subject of endings, the final scenes have an “And they all lived happily ever after” quality that’s totally at odds with everything we know about life at the CIA and in the Middle East. It’s so bad, “Jiminy Cricket” could have been placed on DiCaprio’s shoulder and I wouldn’t have batted an eyelid. 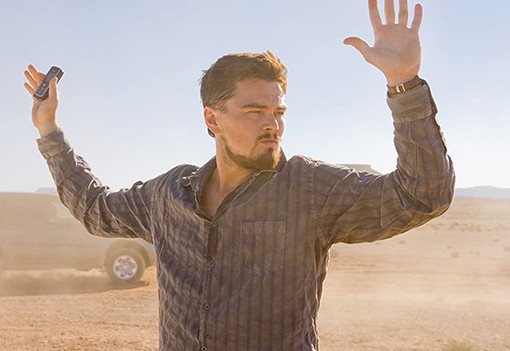 Save “Body Of Lies” for a Saturday night when your friends are unavailable and your girlfriend isn’t returning calls. Watching buildings blow up and people getting shot can fill any empty heart with happiness.

Oddly enough, terrorists express this sentiment all the time. With this in common, maybe “Lies” has given us something to build on. If we can just deploy enough couches and widescreen TV’s to Iraq there may still be a chance to turn this whole mess around.